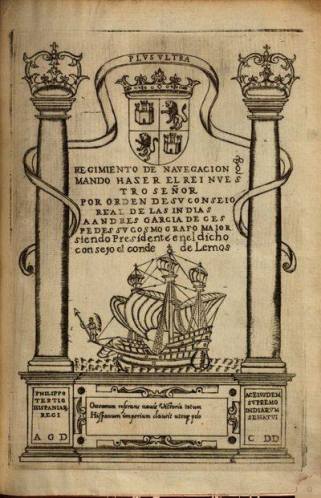 Why is the decolonization of the history of modern science and technology important? So that we can understand why Francis Bacon’s iconic title page image of a European caravella navigating through the pillars of Hercules in his book Instauratio Magna (Great Instauration, 1620) or Novum Organum Scientiarum (“new instrument of science”), which indicated the new program for modern empirical (colonial) scientific development, was actually taken from Andrés García de Céspedes’s book, Regimiento de navegación (Madrid, 1606). This shows the Northwestern European (Dutch, British, German), Protestant hegemonic shift, which stigmatized the downfall of “luxurious”, “inefficient”, “rapacious”, “unindustrialized”, “state-led capitalist” Spain, the Iberian or Southwestern European imperial-colonial project, against the “industrial revolution” and “scientific revolution” of the Northerners, the latter of which the image became a symbol. The deconstruction of this narrative is important in revealing the concealed global histories of colonial scientific and technological development, which was partly a precondition for the development in the new hegemonic centre in Europe. The South American decolonialist approach might be an important influence in decolonizing Eastern European knowledge production, since the Northwestern-Atlantic-Protestant narrative of scientific development, largely present in social scientists’ work such as Max Weber or Karl Marx, was dominantly diffused in Eastern Europe as our Eurocentric understanding of global scientific and economic development. I was educated according to this narrative already in primary school. This story will be included in my chapter on decolonizing Eastern European history of science and technology in the book Technosciences of Post/Socialism planned to be published somewhere in 2018.

Credit goes to Jorge Cañizares-Esguerra‘s work in which I’ve read about parts of the argument I am making. Read a brief overview on William Eamon’s blog.

For those more professionally engaged in the history of science, find a superb overview of annotated literature here.

zginelli@gmail.com Zoltán Ginelli is a geographer and historian of science, PhD Candidate in Geography at Eötvös Loránd University in Budapest, Hungary. His research is in the geographies of knowledge, the history of geography, and global and transnational history. His main focus is on the historical relations between Eastern Europe and the Global South/Third World in the 19th and 20th centuries, including topics such as development and regional planning, (post)colonialism and racism, Cold War foreign policy, and travel writing. He lectured at various universities and colleges, and worked as an assistant researcher in the 1989 After 1989 and Socialism Goes Global projects at the University of Exeter (2015–2019). His current project, Postcolonial Hungary explores Hungarian semiperipheral colonial history from a world-systemic perspective. He is curating the exhibition Transperiphery Movement: Global Eastern Europe and Global South, and finishing his book based on 7 years of research about the global history of the quantitative revolution in geography.